This is the background story to a wedding in our building on December 26, 1910 with 700 guests, officiated by Rabbi Philip Klein of Ohab Zedek, First Hungarian Orthodox Congregation.

Both the bride and the bridegroom are lawyers. They met in the Madison Street Court several weeks ago, one as defending counsel, the other as counsel for the complainant, and their friends say that each was deeply impressed with the skill the other displayed in handling the case.

The bridegroom is Harris Koppelman, whose office is at 302 Broadway. He is a member of the Congregation Ohab Zedek, on Norfolk Street. The bride is Esther Kunstler, daughter of Felix Kunstler, a real estate dealer of 158 Rivington Street.

..The case was won by Miss Kunstler’s client. When Miss Kunstler and Mr. Koppelman left court, however, they were best friends.

Whether the bride intends to continue her practice of law after the wedding will not be decided just yet, say her friends. She and her husband will think that over during their honeymoon which will be spent somewhere in the South. The Rev. Dr. Plilip Klein will perform the ceremony, and several hundred friends of the young lawyers are expected at the wedding. [“Land Suit Leads to Wedding – Bride and Bridegroom First Met in Court as Opposing Counsel”, The New York York Times, December 26, 1910]

By January the wedding report became news in society columns. This is a faded picture of bride and groom with the headline ” Defeated in Court – Weds Girl Lawyer – New York Attorney Loses in Law Clash but Wins with Cupid” on page 3 of the Spokane Daily Chronicle, January 5, 1911.

By the time of her wedding, Esther Kunstler had established herself as a dedicated professional and even earned the recognition of the press. Below are excerpts from contemporary sources:

The East Side of New York has  a Portia who is making a success of her chosen vocation.  She is Esther Kunstler, aged 22, and she has become champion for hundreds, not only in the  city’s police courts, but in the supreme court. She has been regularly admitted to the bar and has a shingle hung out in Rivington Street. The girl has taken upon herself the task of defending the poor people of the East Side. She is becoming famous for courtroom repartee. (The American Israelite, June 26, 1906)

“Oh, how could you do that?” – she exclaimed to the jury when they returned a verdict of guilty in the 19 years old Jacob Rosenstein’s case, charged with burglary. “..a nice, innocent boy like that!” The judge, finding that the boy was never been in trouble before, allowed him to go on a suspended sentence. (The New York Tribune June 8, 1906)

She talks to judge and jury in a “winning manner”, and her witticism keeps everybody in good humor. She generally creates somewhat of a sensation when she appears in a courtroom, for she looks more like a school girl than a lawyer. As she speaks six languages fluently, her list of clients grown steadily. Many of the poor whose rights she has championed look upon her as a sort of angel upon earth. 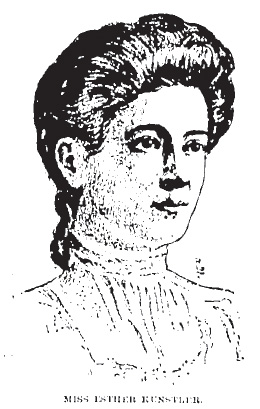 She loves her profession, and her father says that it is hardly likely that she will ever abandon it to marry. On this question Ms. Kunstler is uncommunicative. “My work is my life” – she said. I am happiest when I am defending some of my clients. It is a great work and I hope to make my mark some day. (Boston Advocate Oct 26, 1906 via syndication from The Globe).

Following the wedding in 1910 the two lawyers (both NYU Law School graduates, 1904 for Harris & 1906 for Esther) join forces and operate out of Esther’s law office on 144 Rivington Street up to the late 1930s, just next door to the Kunstler family’s home and properties on the block  (one of them being the building of ABC No Rio of subsequent fame.)